Thimphu is the capital city of Bhutan. A city without traffic lights and an airport of its own, this small city is home to some 100,000 local residents including the Royal Family of the Kingdom of Bhutan. Thimphu is the political and economic center of the country. The city has a 17th century fortress which houses the Office of His Majesty the King and The House of Parliament stands on the eastern bank of the Thimphu River opposite to the fortress.

Thimphu is a multicultural society. It is the equivalent of New York or London on a much smaller scale. With the rise in socio economic development and better opportunities, Thimphu continues to see a rampant influx of people from across the country in search of better lives. The inhabitants of Thimphu represent various ethnic groups. Thimphu has successfully preserved its culture and tradition despite growing exponentially and rapidly. Any traveler exploring this unique city will have the luxury of modern convenience and witness ancient monument and traditional way of life simultaneously.

A massive bronze gilded in gold statue of Shakyamuni sits atop a hill overlooking the Thimphu valley. It measures 51.5 meters in height, making it the largest Buddha statue in the world. The statue was built to fulfill a prophecy to emanate an aura of peace and happiness in the world. This monument complex also includes Kuenselphodrang Park which was inaugurated to preserve the forest around the statue.

The institute plays an integral role in the preservation and promotion of the traditional arts and crafts of Bhutan. Zorig Chusum translates to the thirteen arts and crafts. Many of these skills were pioneered by great Buddhist saints as their way of contribution towards the promotion of Buddhism. Any sacred Buddhist sites across the country and other architecture displays an art of calligraphy, painting, sculpting, masonry among others and travelers can discern the significant role it has played in the creation of a unique cultural heritage Bhutan is gifted with.

Today young artistic students enroll themselves to pursue their passion. The institute has become a major tourist attraction. Travelers can watch these students work on their craft and also walk around the institute’s gallery which has a display of their art works. 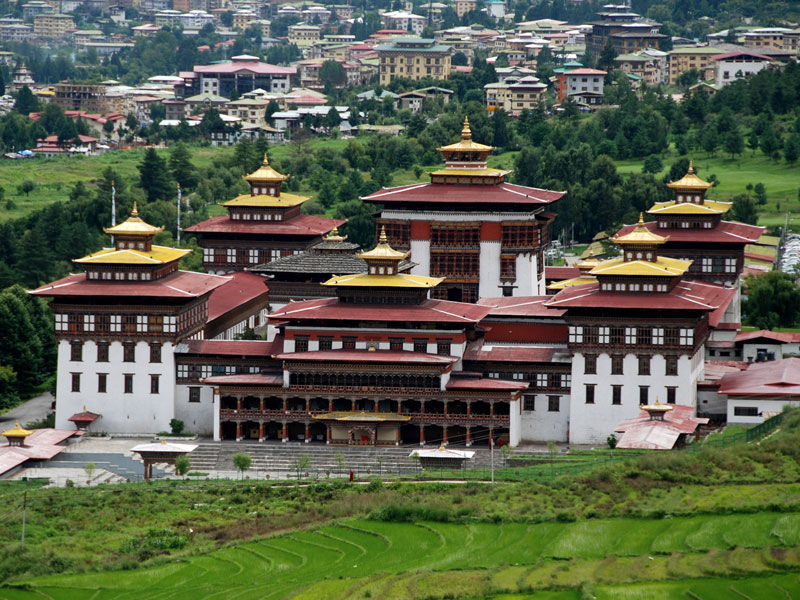 A colossal 17th century fortress constructed on the western bank of the Thimphu River houses the Office of the His Majesty the King of Bhutan. The yellow orange dragon flag gracefully wafts right next to the fortress symbolizing sovereignty and a recognition of a central authority. Fortresses by tradition have always been the seat of the Government.
Aside from the administrative roles of the fort, it also houses Buddhist shrines making it a sacred place thus requiring formal demeanor from all visitors. The popular Thimphu Mask dance festival is hosted in the open courtyard next to the fortress.

An enclosed area in the woods away from the settlement houses the national animal of Bhutan. These mammals are protected and fed. Initially established as a zoo, keeping animals in captive did not align with the national value of environmental conservation and Buddhism, therefore His Majesty the Fourth King commanded the animals be set free however these mammals refused to inhabit the surrounding forests and hence were put back into captivity. Travelers can enjoy the walk in the nature around the park and watch these mammals. 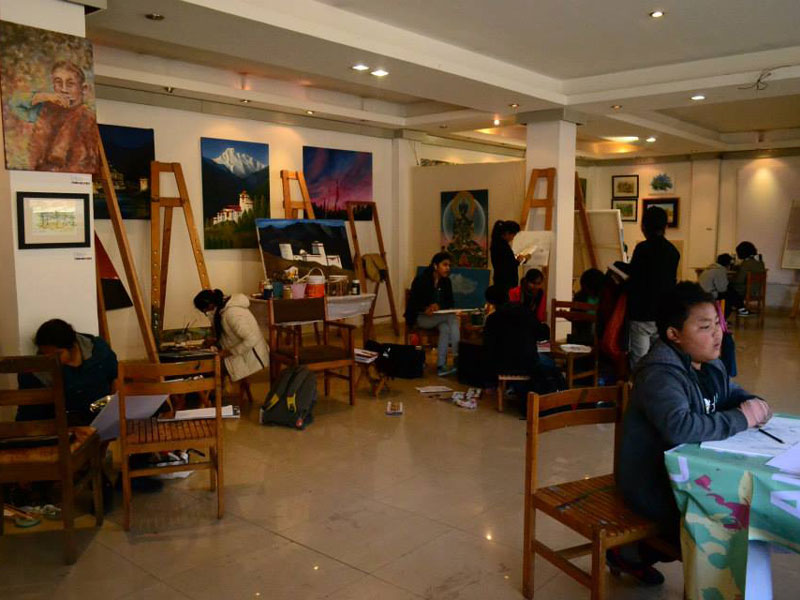 Voluntary Artists Studio, Thimphu popularly known as VAST non-profit organization set up by a group of professional artists. The organization’s mission is to facilitate Bhutanese youth nurture their creative talents and raise social awareness through art. The gallery located within the vicinity of the central town always has an amazing display of contemporary art curated by local artists.

Up to 80% of the local population is involved in agriculture and it remains the primary source of livelihood for majority of the population. The sector plays a dominant role in Bhutan’s economy. The capital city gradually converting once fertile land into concrete buildings to accommodate the increasing rural urban migration, the city has shown its growing appetite and demand for agricultural produce. Therefore farmers across the country work hard to get their produce to the market over the weekend and this trend has evolved into a sustainable trade. A visit to the farmer’s market is always a lively scene where people from all walks of life come together and witness this amazing synergy of communities helping each other grow.

Check out our complete list of top tourist attractions in Thimphu.

Things to do and experience in Thimphu

A traveler can either give it a go at hitting the target set 145 meters away or simply go to the archery field and witness this social event. Archery is the national sport of Bhutan. The sport is popular across the country and every village across the region has their own team. Competing with a neighboring village always brew an intense rivalry as winning rewards the community with a collective sense of pride. The traditional bow and arrow is made of bamboo although imported compound bow and other equipment are becoming popular. In an organized tournament, each team has their own singers and dancers equivalent to the cheerleaders of a football team. These cheerleaders are often represented by the women from the respective community and throughout the game; they cheer their own team while distracting the opponent. This aspect of social inclusive and rivalry, the singing and dancing every time a shooter hits the target and elaborate buffet with alcohol makes it a great social event. The tradition has been passed on for generations.

Contrary to traveler’s perception, Thimphu in particular has a vibrant night life. There are multiple options from bars to karaoke and night clubs. Mojo Park is one of the most happening bars in town. The local bands perform impressive gigs. It is a great place to socialize with the locals, enjoy your drink and the music. A small tip for the travelers on finding a great crowd, locals generally go to a bar first and only towards mid night, they proceed to the nightclubs. Viva city and Space 34 are some of the popular night clubs in Thimphu. The club has seen a growing presence of travelers amongst the crowd. A good mix of Western and Bollywood music appeals the diverse crowd. Drinks are reasonably priced and these clubs also have food stalls. 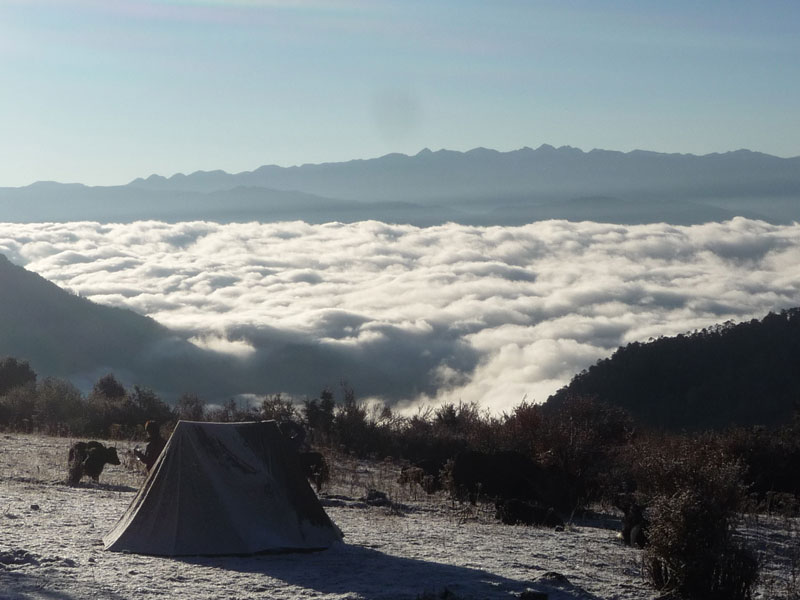 A moderate day hike to Phajoding monastery is one of the most rewarding hike travelers can engage in while in Thimphu. It takes three hours of gradual climb to the monastery. The hike trail takes travelers through the blue pine forest. While the climb can be physically challenging, travelers can enjoy the serenity of being in the woods throughout the journey. Closer to the destination, travelers will clear the tree line and can finally get an amazing view of the Thimphu city and on a clear weather day, the vantage point also offers amazing view of the eastern Himalayas.

Upon arrival, travelers can explore the 13th century monastery and interact with the monks if they choose to. For daring hikers, they may continue their hike upwards all the way to the ridge. A scenic plateau awaits on the other side of the ridge.

Food and popular eateries and restaurants in Thimphu

Thimphu being the most populated city in Bhutan offers its visitors and locals the widest choice of options of when it comes to food. From small eateries to coffee shops to fine dining, Thimphu has it all.

Hotels and accommodations in Thimphu

Depending on the travelers preference, needs and budget, whether it’s an ultra-luxury secluded resort ideal for rejuvenation or internationally branded five star hotel right in the city center ideal for a keen explorer or a local three star hotels with decent service to meet the needs of a budget traveler, Thimphu has many hotels and resorts pick from.

Know Before You Go