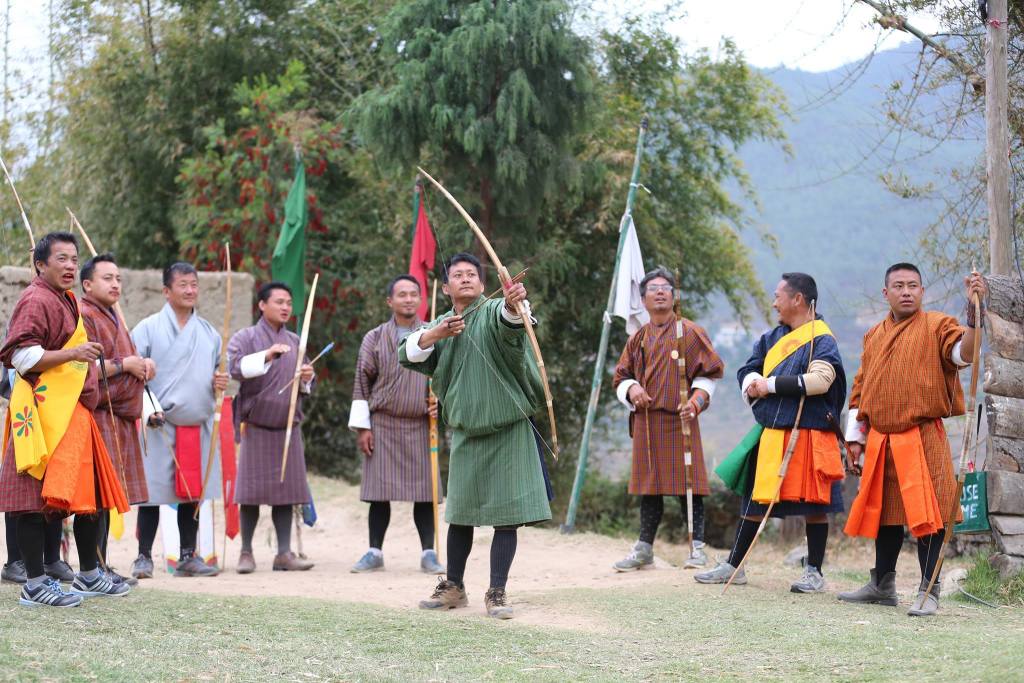 Bhutan is a tiny nation in the Himalayas where tradition is considered and celebrated as an integral part of the culture. Age-old traditions are considered the main glue that helps all the regions of the tiny nation coexist in harmony and festivals are the key ingredient that makes up a tradition. These traditions are passed down from one generation to another and are kept alive by the means of celebration. As a Buddhist country, the core value of any festival is to thank the deities and pray for well being of all the sentient beings. There are mainly two categories of festivals in Bhutan; the religious festival, widely known as the masked dance festival, and the customary festival which are New Year celebrations and many other similar ones. Though there are many festivals under both categories, the most popular ones are mentioned below. To give you a fair idea about all the festivals of Bhutan and their dates, click here. You can also book or plan your holiday in Bhutan coinciding with the festival of your choice. 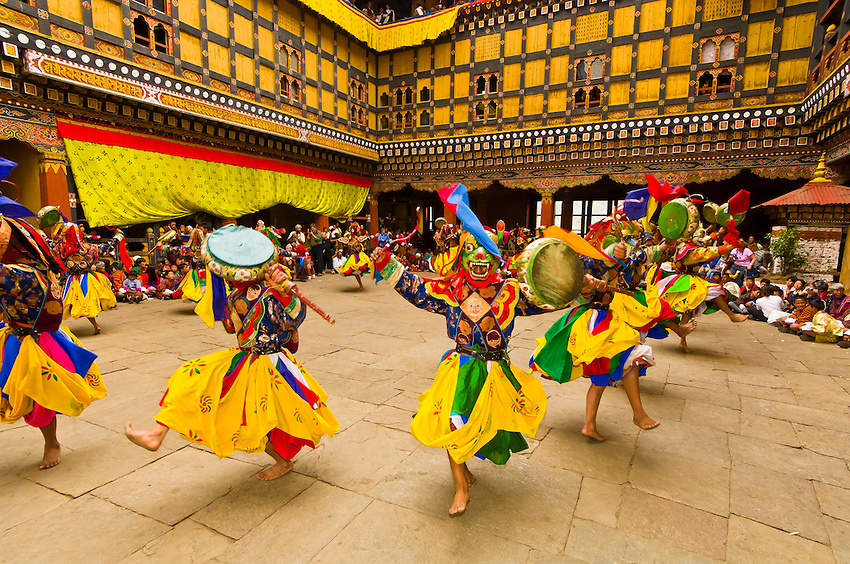 Tshechu or masked dance festivals are a significant part of the Bhutanese culture. The festival showcases the religious aspect of Buddhism as it commemorates the spread of Buddhism across Bhutan by Guru Padmasambhava. The festivals are celebrated throughout the country in different months but on the 10th day according to the Bhutanese lunar calendar. The festival usually lasts three days to a week. These religious dances are believed to bless the spectators and cleanse them off of their past sins and bad karma.

The dances are usually performed by monks in an open courtyard of colossal fortresses known as Dzongs. The dancers are adorned in long silk and brocade robes and meticulously crafted masks. The dancers go through months of extensive practice for the final day. In Bhutan, Tshechus are an essential cultural experience.

Thimphu Tshechu is the second most attended festival by the travelers in Bhutan after Paro Tsechu. The Tshechu falls on 10th day of the 8th lunar month. The renowned festival unfolds on the courtyard of the colossal Tashichoedzong. Staying true to the age-old tradition, people dress in their textile rich attires and ornaments to congregate for the festival.  The festival kicks off with dancers usually monks dressed in colorful silk robes and faces masked with perfectly crafted wooden masks marching to the center stage after which an array of dances are performed.  Local folk dances by the district dancers are carried out in between to entertain the crowd. The three-day festival concludes with the unfurling of a gigantic Thongdrol of Guru Padmasambhava.

Paro Tshechu is the most popular among the festivals. Every year it draws thousands of local devotees and intrigued foreigners. The massive fortress gets filled with people to its rim. Locals visit the event dressed in their best textile rich clothes adding to the life of the Tshechu. The festival is celebrated for three days and begins on the 10th day of the second lunar month. Series of masked dances are performed followed by traditional folk dances. The whole valley comes to life with vibrant colors and the amazing energy from the festivals. Families, friends, and neighbors gather around nearby meadows for picnics. It truly is a celebration of togetherness. The final day is graced by the king and the queen. There is a really sweet account on why the king visits the final day of the festival; a few years ago the king met a differently able-ed special kid with whom he made a promise to meet on the same day every year. After which every year, the whole nation awaits the special reunion. The festival concludes with the unfurling of a massive silk religious scroll locally known as Thongdrol which translates liberation upon sight. The scroll is almost two centuries old.

Punakha Drubchen is considered as one of the most significant festivals in the country and unlike most other festivals, this one lasts for a week. The festival is held in the massive courtyard of the remarkable Punakha Dzong.  The dances include a series of religious masked dances along with a reenactment of significant historical events. The festival is considered no less than a blessing through sight and is also considered Bhutan’s most sacred festival.

The otherwise dead town comes to life with the amazing synergy from the festival as elders feel blessed and youngsters immerse themselves in different games and play at the carnival-like fair set outside of the Dzong. 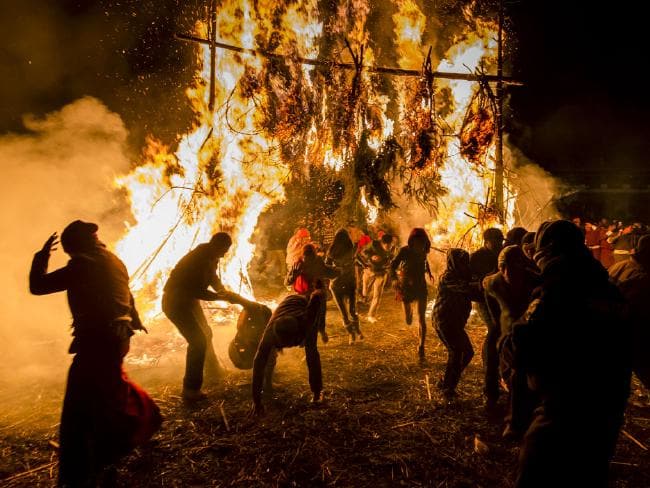 The Jambay Lhakhang Drup is quite a remarkable festival. The event comprises of a number of very rare dance such as the naked dance known as Peling Tercham and the fire blessing locally known as the Mewang. It also showcases popular dances like the dance of Earth and Sky Heroes known as the Ging Tsholing Cham and the Black Hat Dance known as Zhana Nga Cham and many more. Among a series of dances, the naked dance is the most enthralling as the dance requires the dancers to perform completely naked with only their faces masked. The rare dance is a crowd magnet as every year it draws over thousands of locals and foreigners.

The Dochula Tshechu is a rather new addition to the list of festivals in Bhutan. Unlike other festivals in Bhutan, this festival celebrates the wise leadership of His Majesty Jigme Singye Wangchuck, the fourth king of Bhutan. The dances are performed by the Royal Bhutan Army. The unique dance draws thousands of people every year including locals and foreigners. The festival is celebrated at Dochula with an amazing view of the mighty Himalayas as the background. 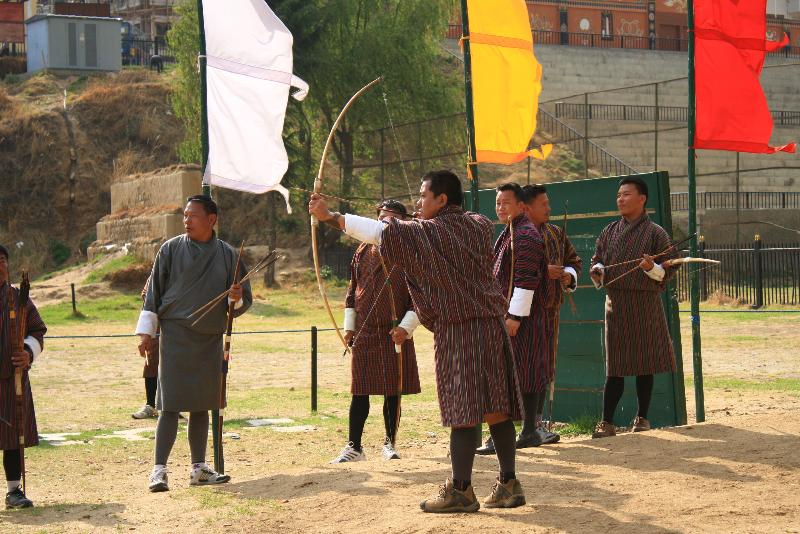 Losar literally means the New Year. In Bhutan, it is celebrated on the first day of the first month of the lunar calendar. Losar is one of the greatest festivals to be celebrated throughout the country. Losar celebration is one the most festive periods of the year observed with a lot of religious, cultural, and merrymaking events for at least three days.  The celebration is the time when all the family members gather together in their ancestral home to observe the event. Adults, children, and elders all dress up in their best attires and prepare the most scrumptious delicacies of the region to celebrate the day. Furthermore, men indulge in traditional games like archery, shot put throwing, and dart throwing contests. Everyone forgets about their fields, important works and celebrates the day wholeheartedly. The day begins with taking bath and making offerings to deities in the altar and later gathering around for the special rice porridge. In villages, people also hoist colorful prayer flags on top of the house for a fruitful year without deaths and illnesses in the house and in the village.

The first day of the twelfth lunar month is celebrated as a New Year in the eastern parts of Bhutan. The day is also known as the Traditional Day of Offering  as it is said that on this day people lay their tribute in the Zhabdrung’s feet by offering their best harvests to him in Punakha Dzong.  Quite similar to the thanks giving holiday in America, it’s a day to thank the local deities for a rewarding harvest. Since the day is mostly observed by the people of eastern regions, it is also referred to as Sharchop Losar (New Year of the easterners). The celebration however is similar to the Lunar new year, families gather to eat delicious food, play traditional games, and dance. Men often play games such as archery while women stay at home. In the evening people drink and dance to remark the day celebration. Some enjoy going out to have picnic lunches with their families. 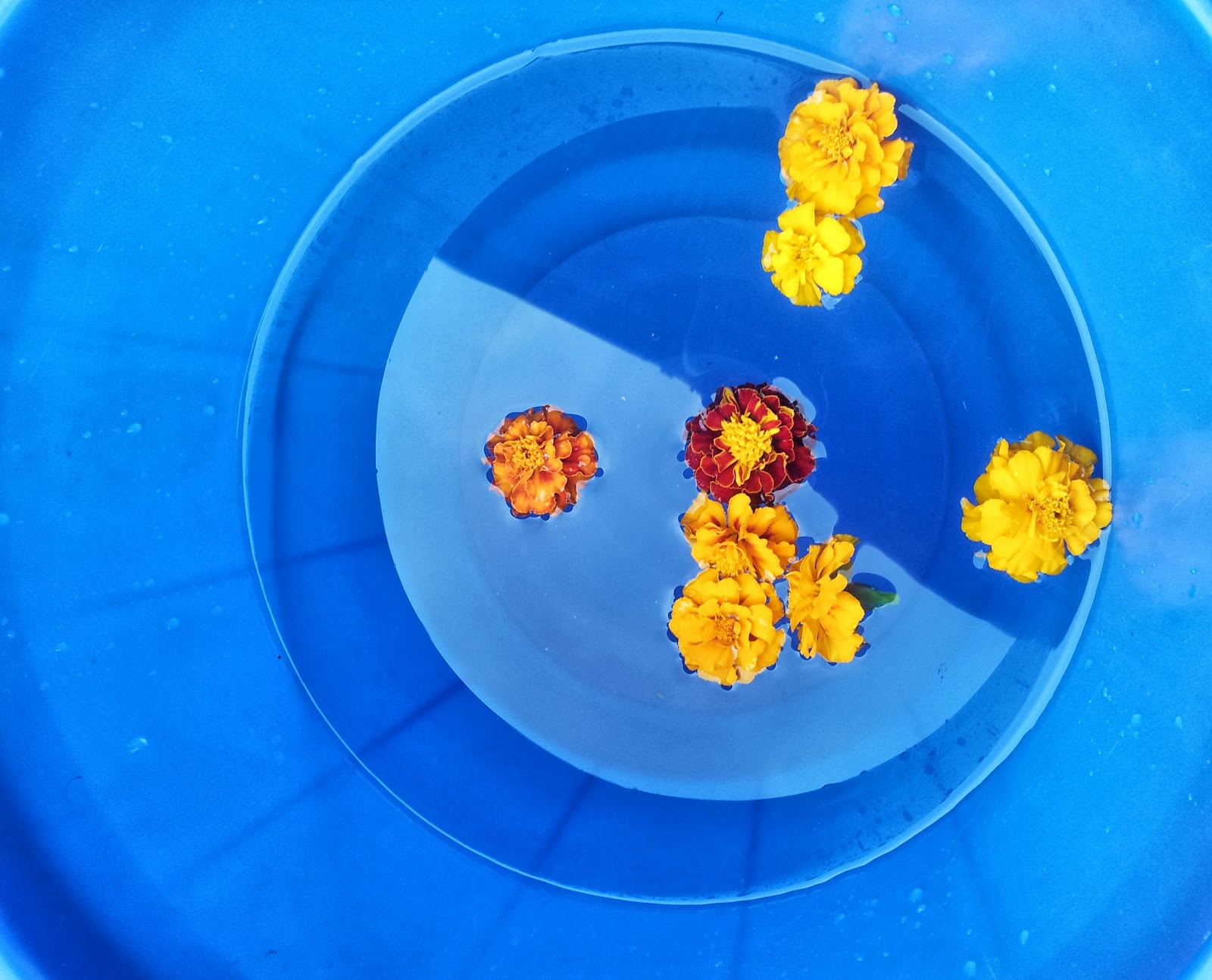 Blessed Rainy Day is observed almost at end of the annual monsoon season, just at the beginning of the harvest season. It is considered a sacred day on the Buddhist calendar. The tradition is for people to take a bath outside on this day with the water kept outside in a bucket to be blessed by the day. Some people also put cypress tree leaves and flowers as an offering to the gods who bless the day. Furthermore it is considered more beneficial to take a bath in the rain as it is believed that “bad karma” from any bad deeds in the past year and any illnesses will be washed away. The rest of the celebrations include having family gatherings to wine and dine on delicious meals and men playing traditional games.

Taking part in one of Bhutan's extraordinary festivals will prove as an enriching experince for anyone traveling to Bhutan.

Tips for traveling to Bhutan with kids

5 Inspiring Books to Read before Travelling to Bhutan

21 Gems in Bhutan You Won't Find in a Guide Book