Beautifully painted two storied traditional houses lined on either side along the 100 meter main street was the entirety of Paro town until the recent years. Since then the town has grown laterally with modern structures over the years but the oldest street with western inspired renovated storefronts preserving the traditional aspects of the architecture still remains the charm of Paro town. The street has series of handicraft shops and cafes serving decent coffee and international cuisine.

Approximately a kilometer away from the town is the Paro International Airport. Therefore the town remains a key gateway for tourists arriving and departing the country. The containment of growth of Paro town and the community’s commitment to conserve its agricultural land across the valley is what sets Paro apart from Thimphu. The luscious green color of the plantation activity starting spring and the transformation of the paddy into a golden color during the harvest season transform the whole valley into a large scale organic farm. 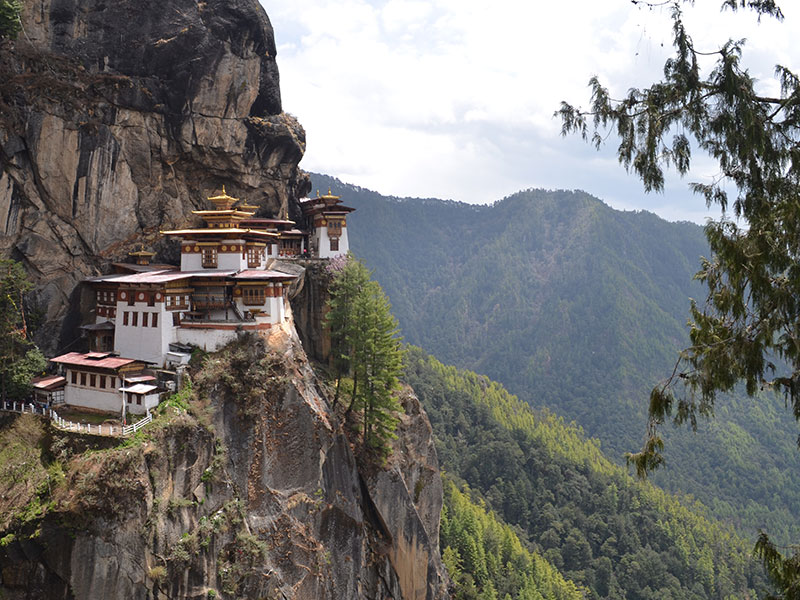 The most anticipated moment of any traveler visiting Bhutan is the hike to the Tiger’s Nest monastery. Built in 1692, the ancient temple is perched on a sheer cliff 900 meters above the Paro valley. According to the legend, Guru Padmasambhava flew to this site on the back of a tigress to meditate and bless the area in the 7th century and hence the site was named Tiger’s Nest as per this legend.

It will take about 4 hours to hike up to the monastery and return to the base. For travelers to witness first hand this architectural achievement seemingly defying gravity and the panoramic view of the Paro valley from the top is worth the tiring hike. It is one of the most revered Buddhist site and attracts locals and tourists alike from around the country and all over the world. The Tiger’s nest monastery has truly become the icon for destination Bhutan. 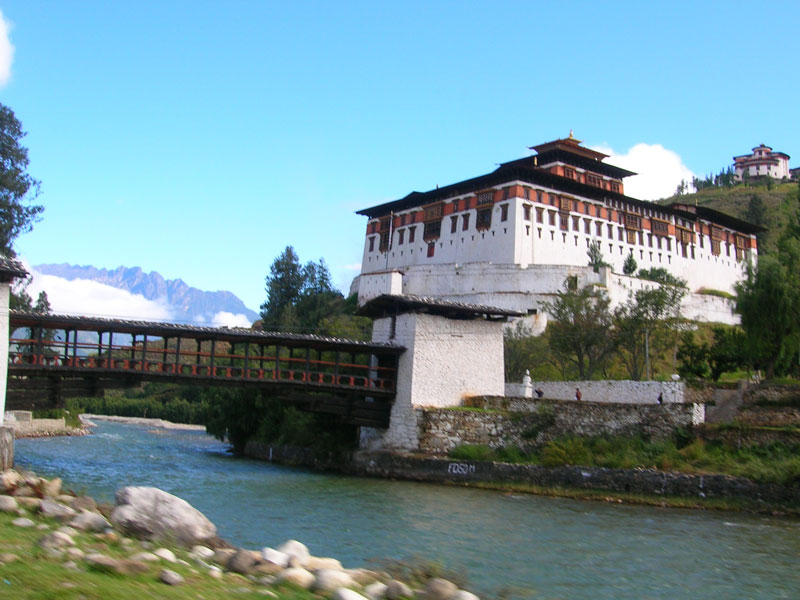 A 17th century fort serves as the administrative center for Paro district. The dzong is approached by a traditional cantilever bridge built over the Paro Chhu and a gradual ascend of cobblestone path lead travelers to the fort. Constructed on a ridge, the dzong overlooks the Paro valley and the Ugyen Pelri Palace.

The Dzong is characterized by a five storied central tower (Utse) and open courtyard guarded by high rising walls. The walls have built in windows with ostentatious traditional woodwork and the customary white and red strip paint job. The Utse houses the shrine of the guardian deities and temples dedicated to the Drukpa Kagyupa (state religion) saints. 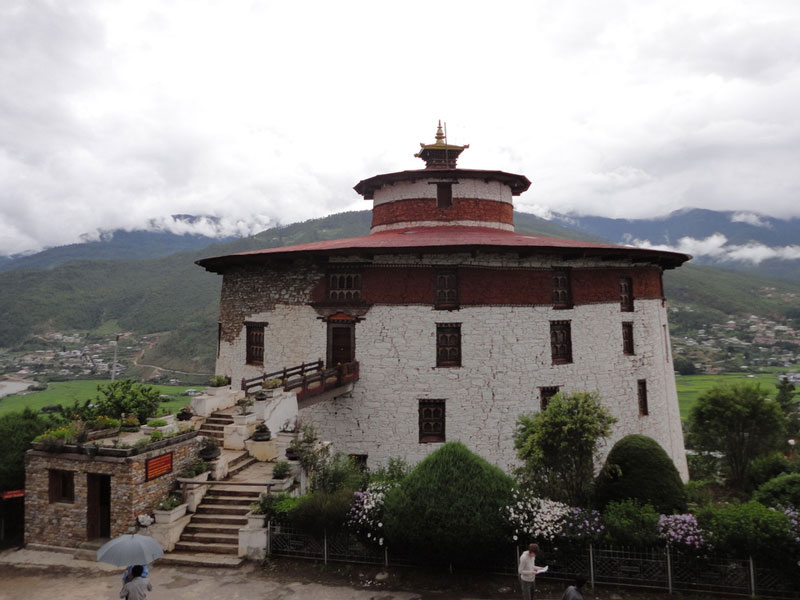 It houses many antique and precious objects ranging from ancient and modern scroll paintings (Thangka), earthen, copper and bronze pots dating back to 17th century and variety of swords. There are also exhibits of objects and artifacts relating to insects and animals of Bhutan, ancient arms and weapons and farming tools.

Some of the highlights of the museum’s collection are an egg laid by a mule, a horse horn, original iron links used to build the Tamchog suspension bridge and stone axe (Namchag) which was used during warfare and hunting. This monolith dates back to the Stone Age. 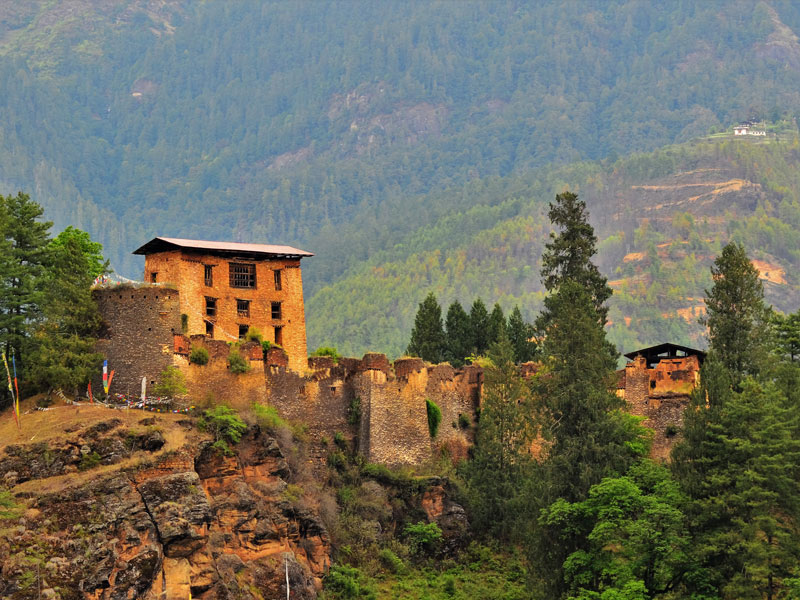 A defense fort built in 1649 to commemorate Bhutan’s victory over allied Tibetan- Mongol invasion. The chosen location and the structural design of the fort were strategically thought through by the military to counter possible future invasion from the north. In 1951 an unfortunate fire incident reduced the glorious fortress to ruins. Over half a century since the fire incidence, Drukgyal Dzong is finally being restored to its former glory.

Things to do and experience in Paro 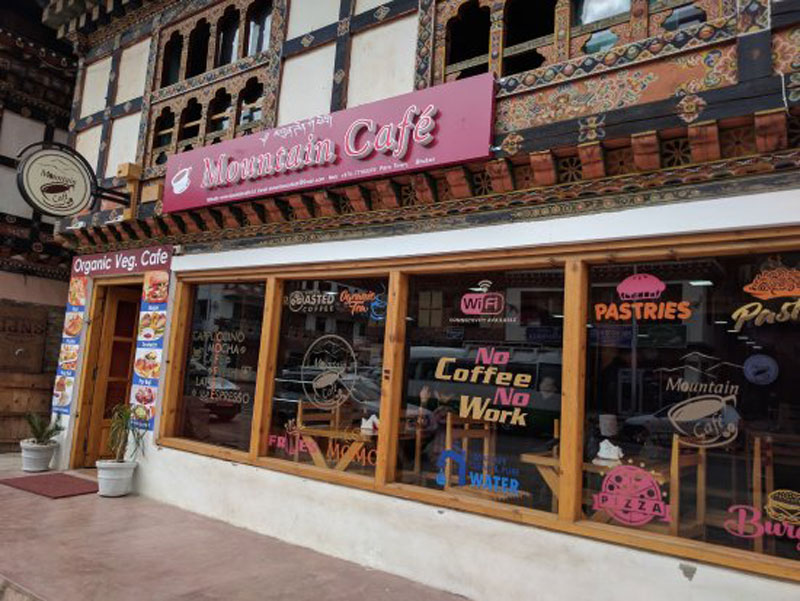 A leisure walk along the main street of Paro town can be a unique experience. Without the busy schedule of the tour itinerary, travelers can either choose to step inside a café and just gaze through the window to absorb the Bhutanese way of life while sipping a hot cup of coffee or they could explore the handicraft shops which have a collection of antiques and contemporary hand crafted products.

Taking a hot stone bath is the perfect way to unwind any traveler’s day. In a traditional set up, cold water is poured into a wooden tub. The enclosed small room would also have a fireplace where the stones are heated and the fire also to keeps the room warm. Once heated, the hot stones are put into the tub in a segregated compartment releasing high concentration of minerals while also heating the water. Stones are periodically changed to maintain the water temperature. Herbs are also added to make it more therapeutic. 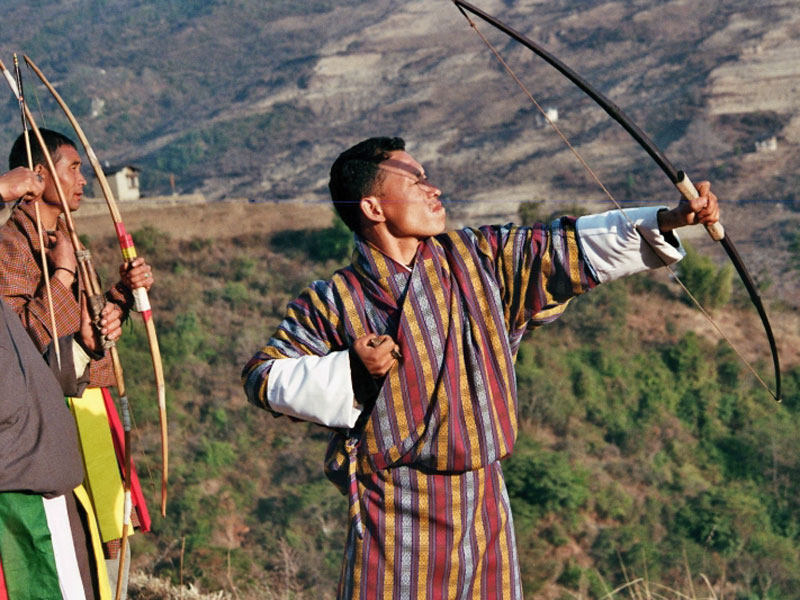 A traveler can either give it a go at hitting the target set 145 meters away or simply go to the archery field and witness this social event. Archery is the national sport of Bhutan. The sport is popular across the country and every village across the region has their own team. Competing with a neighboring village always brew an intense rivalry as winning rewards the community with a collective sense of pride. The traditional bow and arrow is made of bamboo although imported compound bow and other equipment are becoming popular. In an organized tournament, each team has their own singers and dancers equivalent to the cheerleaders of a football team. These cheerleaders are often represented by the women from the respective community and throughout the game; they cheer their own team while distracting the opponent. This aspect of social inclusive and rivalry, the singing and dancing every time a shooter hits the target and elaborate buffet with alcohol makes it a great social event. The tradition has been passed on for generations.

Food and eateries in Paro

Hotels and accommodation in Paro

Depending on the travelers preference, needs and budget, whether it’s an ultra-luxury secluded resort ideal for rejuvenation or internationally branded five star hotel within the vicinity of the city ideal for a keen explorer or a local three star hotels with decent service to meet the needs of a budget traveler, Paro has many hotels and resorts pick from.