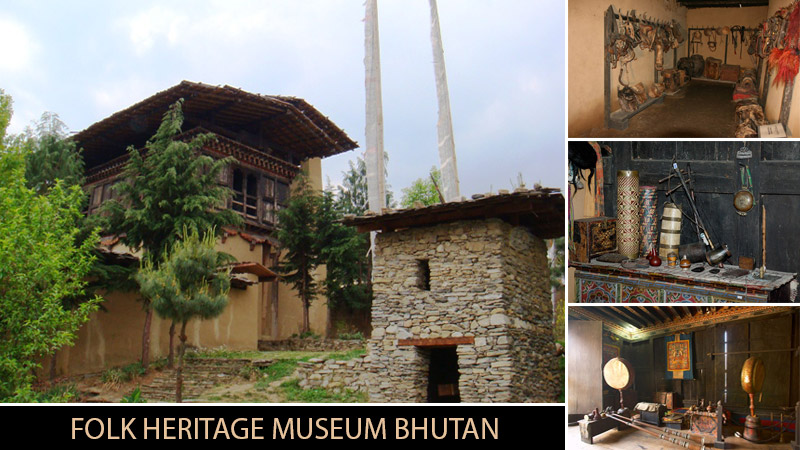 The museum is an exhibition of Bhutanese heritage highlighting the traditional way of life during the medieval era. The documentation about the ancient rural life through the restoration and conservation of ancient artifacts is initiated to promote the folk heritage among the new generation and also curate a vibrant experience for tourists. The museum is a restored 150 years old house furnished with an 18th century interior setting. A walk around the house can give tourists a glimpse of medieval Bhutan. A collection of tools and rooms designated for specific purpose gives way to understanding the activities people engaged in at the time.

Architecture
The main structure represents a typical house from the medieval era in the region. It is a three story house built by ramming mud and strategic allocation of timber. The gently sloping roofs are made of shingles. Stones are placed over the shingles to keep them in place. Few structures still exists inhabited across the country proving its durability and a testament to the skills of these construction workers at the time.
The museum has an attached courtyard. Most traditional Bhutanese houses were known to have an enclosed courtyard. The space was used to keep farmer’s livestock safe from the wild animals. Many household chores such as roasting rice, brewing of Ara (local alcohol) and grinding grains were all carried out in the courtyard.
Generally the basements were used as cattle shed. Farmers would collect leaves from the forest and place it in the basement as bedding for the cattle. The animal waste and the leaves decompose which is then used as organic manure for farming. Over time however, with raised hygienic awareness, raising cattle in the basement is no longer practiced.
The second floor of the house has the storage facility. Agricultural products and farming equipment are stored on this floor. Red rice is stored in a wooden container or a big basket. The husk is not removed to preserve the rice longer. The museum has a collection of various storage containers on display.
The third floor of the house is where the family lives. The floor has an alter (choesham) which is an essential component of every house and it also has a living room and a kitchen. The traditional kitchens are equipped with built in mud stoves fueled by fire woods. .
Other highlights of the museum includes traditional hot stone bath, water propelled prayer wheel and stone mill. With prior arrangements live demonstration of rice roasting and ara brewing within the premises is organized.