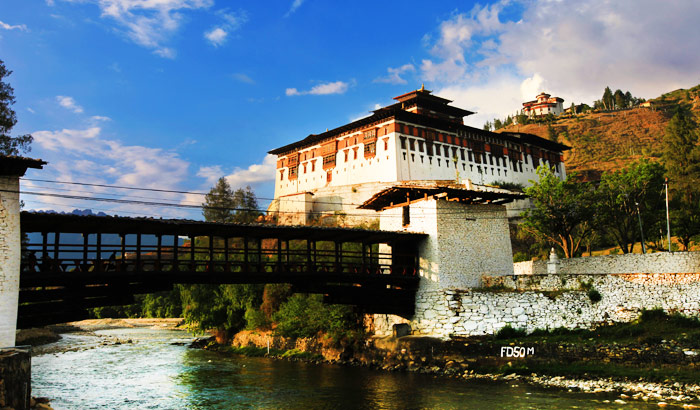 The fort is built on a hill above the Pa Chu River overlooking the Ugyen Pelri Palace and the scenic Paro valley. A traditional cantilever bridge roofed with wooden shingles takes travelers across the river and onto a gently sloping cobblestone path leading towards the Paro Dzong. The Dzong is the administrative seat of the district of Paro and also houses the state monastic body.
The fort was built in 1644. It survived a massive earthquake in 1897, a testament to the structural integrity of these colossal architectures built across the country. However in an unfortunate fire incident in 1906, the Dzong was razed to the ground losing all of its sacred relics except for the 20 * 20 meters scroll painting (Thongdol). This gigantic sacred scroll painting is one of the oldest of its kind in the country and is unfurled for public display during the annual Paro Tsechu. The temporal administration at the time raised fund by levying special tax across the country and rebuilt the Dzong to its former glory.
The Dzong is characterized by a five storied central tower (Utse) and open courtyard guarded by high rising walls. The walls have built in windows with ostentatious traditional woodwork and the customary white and red strip paint job. The Utse houses the shrine of the guardian deities and temples dedicated to the Drukpa Kagyupa (state religion) Lamas.