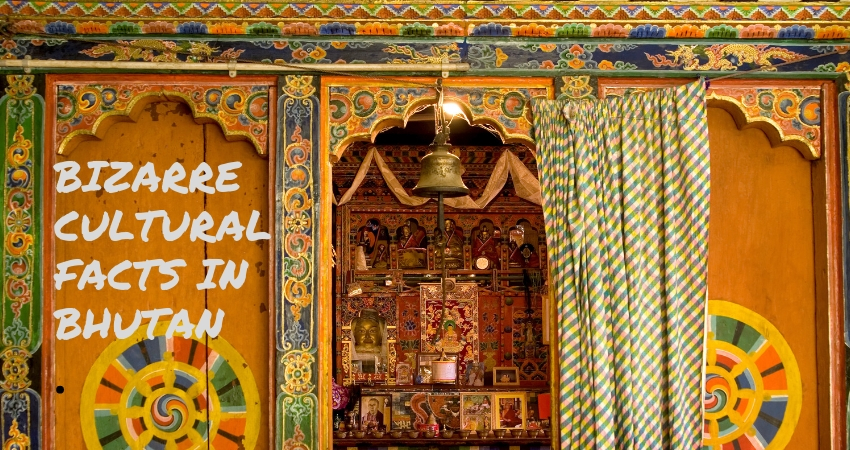 Bhutan has always been known for its unique culture and distinct customs. From eating with their fingers to marrying their own cousin, Bhutan has some of the weirdest customs that are no less than considered bizarre to the outside world. Here is a list of such unbelievable bizarre cultures in Bhutan.

Polygamy used to be a common practice in Bhutan and was not exactly frowned upon. It was not widespread in the urban areas as it used to be in rural areas. Especially the Highlander women are known for keeping two husbands. In Bhutan, women are the ones who inherit the family inheritance and in families where there is more than one daughter, two sisters are usually married to the same man thus keeping the assets undivided. This practice was common in the western part of the country. However, this practice has become rare/non-existent among the younger generation.

Night hunting is a tradition widely known to be practiced in the eastern and central regions of Bhutan. It is the practice of young boys climbing in through windows to engage in sexual activities with a girl, either his girlfriend or someone he has feelings for. The two-storey Bhutanese house with sliding windows made it convenient for the men to climb in. The term night hunting is the comical name given to the practice. It is the equivalent of urban day casual sex. It is no longer practiced due to stringent laws and of course new technologies that prevent intruders from breaking into the house.

Also check out: 10 things  you did not know about Bhutan

This is as weird as it sounds, as, in the eastern and central regions of Bhutan, the marriages of immediate cross-cousins were considered acceptable. It was also thought to be a privilege to marry one’s uncle’s daughter.  Serga Mathang is referred to the female cousin and the Serga Khotkin is the male cousin. The marriage of the Serga mathang and Serga Khotkin is known to be an honor in the olden times. Today, due to educational awareness and due to medical factors, it is no longer as common as it was some years ago.

Bhutanese people love eating with their hands or fingers to be exact. The use of spoons and forks for eating is considered new and more of imported culture. The family members circle around a low table or usually without a table by the hearth and wait for the mother to serve and hand the plates to the other family members. Eating with hands is apparently supposed to intensify the flavors of the food. While the locals enjoy it, the foreigners think it to be dirty and unpleasant.

Drinking alcohol is an integral part of the Bhutanese society and is widely accepted as a social norm. It is no joke as  “According to a study, per capita, alcohol consumption among Bhutanese adults (above the age of 15) is 8.47 liters against global consumption rate 6.2 liters. Two in five Bhutanese currently drink alcohol and one in five engage in heavy 'episodic drinking'.” In eastern or rural parts of the country, drinking is a daily practice. The practice of drinking from dawn to dusk is customary. The first drink at dawn or upon rising is the ‘Zhengchang’, the second drink is offered with breakfast and is called ‘Tochang’. Then comes the drink with lunch ‘Tshoechang’, the second last is with dinner which is the ‘Tshochang’. The very last one before going to bed is the ‘Zimchang’. This practice is prevalent in the rural parts of the country. Alcohol is a significant part of any occasion and is treated as a good way to start an important event. The ritual of ‘Marchang’ or the wine oblation ceremony is a must for any important ceremony.

Bhutan Honeymoon Tour: A romantic escapade into the Mountains