The ruins of Zhongar Dzong, neglected by the locals for some reason stands on the national highway of Mongar and Trashigang. Stretched over six acres of land, the once largest fortress in the country, big enough to hold an archery match inside the courtyard now stands encroached by woods and its crippled walls suffocated with wild weeds. The fortress was ravaged by fire and was razed beyond restore.
The ruins hold great historical significance and its beauty stuns visitors from foreign lands. The visual is just beyond description and only a visit can account for the astonishing sentiments while gazing at the ruins.
No written accounts were ever discovered about the fortress, which probably may have been destroyed by the fire, but oral accounts claim that a once upon a time a king of the region had requested a proficient architect from Paro valley called the Zow Balip. The zow Balip had built the fortress with much distinct designs and an incredible architecture with which the King was very delighted and had invited the Zow for a feast where he cut off the Zow’s hand to prevent the Zow from building a more majestic fortress than the Zhongar Dzong.
The ruins of the fortress emanate rich history engraved within its cracks. 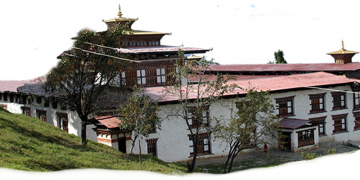 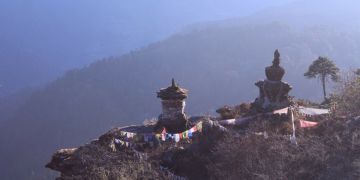