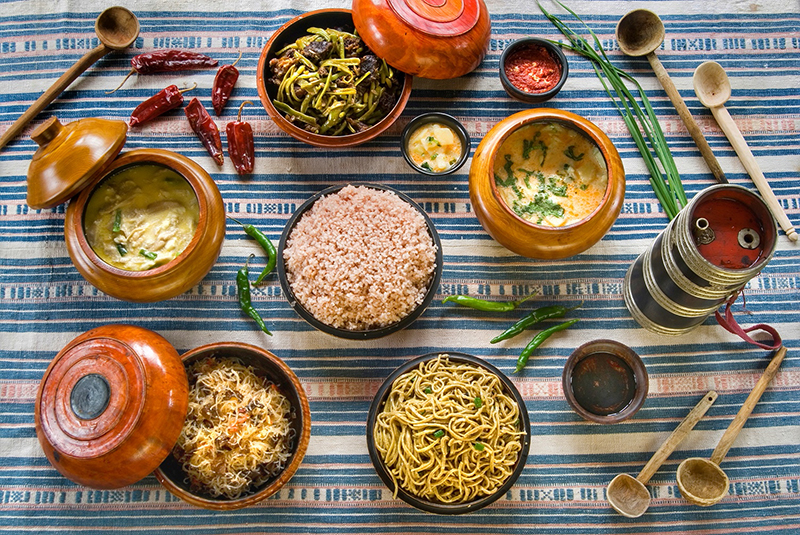 The absence of agricultural resources and expertise up until recent times and lack of extensive trade with its neighbors in the early days, an average Bhutanese had minimal local produce and ingredients to explore and broaden the range of local cuisine. Aside from celebration, traditionally Bhutanese approach food strictly as a means to sustain and prepare their body for a hard day of physical labor in the fields. This lack of emotional attachment to food may have impeded the progression of Bhutanese cuisine. Preparing a Bhutanese dish can be as simple as putting all the ingredients in a pot and cooking it until it’s done.

Locally grown red and white rice, chilies and cheese are national staple. Other carbs such as buckwheat and wheat flour are used to make bread. Most Bhutanese dishes are cooked with local fresh cheese and one such dish known as Ema Datshi (Chili with cheese) has become the icon of the Bhutanese cuisine. Other variation of this classic dish such as Kewa Datshi (Potato with cheese) and Shamu Datshi (Mushroom with cheese) are also popular.

Shakam (sun dried beef) and Sikam (air dried pork belly) are a local delicacy. These non-veg produce are either cooked in smaller chunks with cheese and chili served with flavorful stew or in bigger chunks with vegetables and little gravy known as Paa. Any major feast celebration in Bhutan calls for these dishes on the buffet. The seasonal wild vegetables such as varieties of mushroom, ferns and orchids are sold at a premium when available in the market. Most Bhutanese meals are enjoyed with butter tea (Suja) or milk tea (Nga ja).

The cuisine landscape however is changing rapidly. A fusion of Indian and local cuisine is quite popular among many household and locals are developing a taste for Chinese, Western and most recently south East Asian cuisine.

Indigenous Food Tourists Must Try While in Bhutan