The sanctuary is home to the endangered species such as Himalayan red fox, red panda and the black bear.

It is a moderate trek through the Sakteng Wildlife Sanctuary with a maximum elevation of 4100 meters. The sanctuary is home to the endangered species such as Himalayan red fox, red panda and the black bear. The region is popularly known as the valley of Yeti (the abominable snowman). Locals in the area claim the existence of Yeti however it is deemed a legend due to the lack of evidence to substantiate this claim.
The highlight of this trek is the stop at the scenic Merak village. It is home to the semi nomadic indigenous people known as the Brokpas (highlanders). Settled at 3500 meters, the Brokpa’s livelihood is depended on herding Yaks. Some of the Brokpas still lead a nomadic lifestyle moving with their herd of Yaks and bartering to procure their needs. Fermented Yak cheese is a delicacy. Brokpas speak their own dialect and usually stand out with their unique clothing. Men wear a thick red wool coat and women wear a red and white striped dress. Men are further adorned with animal skins.
Mornings in this village are truly magical. A settlement of approximately 30 traditionally built houses remains covered in the mist. Smoke rises through the roof slowly disappearing into the mist. People sit around the fire to keep warm and a hearty breakfast is served with a yak butter salted tea. This experience is a true getaway from the modern world. 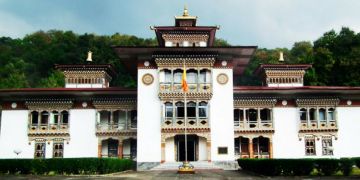