Lhakhang Karpo and Lhakhang Nagpo are among the 108 monasteries built in one day by the Tibetan king Songtsen Gampo in the 7th century.

Lhakhang Karpo and Lhakhang Nagpo are among the 108 monasteries built in one day by the Tibetan king Songtsen Gampo in the 7th century. The king is said to have released two pigeons, a white and a black one from his consciousness to select the sites to build the temples in Haa valley.
The Lhakhang Karpo is located at the foothills of the three towering mountains commonly known as Rigsum Gonpo to the south of the Haa Dzong as it was where the white pigeon had landed.
The temple was then named Lhakhang Karpo (white temple) deriving from the landing of the white pigeon. A colossal door intricately carved welcomes visitors with much grandeur to the Lhakang. The architecture of the Lhakang both exterior and interior depicts true Bhutanese art and culture. Inside the complex, the walls shout with murals and paintings of Buddhist master, deities and great saints.
The Lhakhang Nagpo is situated a kilometer away from Lhakhang Karpo in Dumcho village in Haa valley. The black pigeon had landed a little to the North of Lhakang Karpo indicating the destined site of the present Lhakhang Nagpo. The temple was named Lhakhang Nagpo (black temple) as it was built on the site where the black pigeon had landed. The Lhakang is built on a lake. An opening in the floor of the temple provides an access to the lake underneath the temple. The Black temple owing to its name is black in color and is built amid the tranquil lush green forest.
These two temples stand as the guardians keeping watch over the valley. 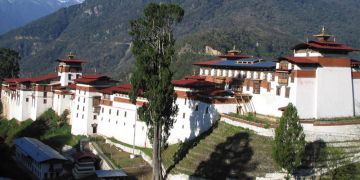