The monastery overlooks the beautiful Chummey valley in Bumthang.

Tharpaling Goemba is situated at around 3600m overlooking the picturesque Chumey valley in Bumthang. From Gyetsa village in Chumey valley, the pilgrims can drive up to the monastery which takes about half an hour, but often during summer, the road is damaged by the monsoon making it difficult for the cars to progress. So during those times, the pilgrims can choose to hike up to the monastery from Gyetsa village which takes about three hours.

Tharpaling means liberation. In the 14th century, Buddhist saint Gyalwa Longchen Rabjampa is said to have visited the place to preach dharma following which many devotees were liberated during his time of self-imposed exile from Tibet for Ten years. Thus the name of the place came to be known as Tharpaling. In the 15th century, Terton Pema Lingpa discovered treasures from the place including a Guru Statue. The First King of Bhutan renovated the place into a retreat center and spent time meditating in the place during his reign.

The Tharpaling main building houses two temples. The temple on the ground floor called the Tshogkhang is adorned with statues of Longchen Rabjam, Guru Rinpoche. The small temple on the top floor was restored during the time of the First King of Bhutan, Ugyen Wangchuck. It contains very beautiful paintings of the paradise Longchen Rabjam and Zhabdrung Ngawang. The focal statues are those of Samantabhadra, Guru Rinpoche, and Longchen Rabjam. The assembly hall of the monastic school has beautiful paintings of the Neten Chudrug (Sixteen Arhats) and the lineage of Longchen Rabjam which are worth seeing. The Eight Chortens can be seen aligned beautifully just below the monastery complex which was built to commemorate life events of the Buddha.

The monastery is an important religious monument of Bhutan where an ancient precise monastic tradition is taught to the scholar and holds an annual prayer, a Monlam, in the first lunar month of the Bhutanese calendar.

The pilgrimage site has an enormous phallus carved of stone known as the great cannon of Tharpaling. According to the keeper of the monastery, the phallus is pointed towards a village that has a shape of a female organ which was considered a threat to the sanctity of the monastery. Incidences of many monks giving up their monkhood were associated with it. The issue seems to have subsided since the erection of the great cannon. 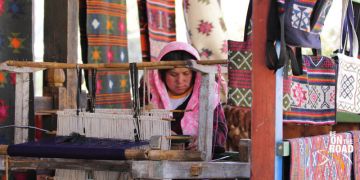